The following is the list of Indians who have won  Oscar Awards so far:

Ms.Bhanu Athaiya –  was awarded Oscar Award for the ‘Best Costume Design’  for Richard Attenborough’s film  ‘Gandhi’ in the year 1982. She became the first Indian to receive an Oscar award.

Ms.Bhanu Athaiya, a famous costume designer of Indian Cinema was  born in Maharashtra on 28th April 1926.

Ms. Bhanu (86 years old)  is at present residing at Mumbai and recently she expressed her wish to return her Oscar trophy to American Academy of Motion Picture Arts and Sciences as she felt  that her family would  not be able to take care of trophy after her demise.

Mr.Satyajit Ray of Kolkata was born on 2nd May 1921 and he expired on 23rd April 1992.
He  was an Indian filmmaker and he has  directed thirty-seven films, including feature films, documentaries and short films and he is regarded as  one of the few great masters of world cinema.

Besides filmmaking, Ray  was also  a story writer and well known for his calligraphy and advertising works.

In 1992, ‘Rai received the ‘ Lifetime Achievement Oscar Award’  from his sickbed in Calcutta through a special live satellite-television event. 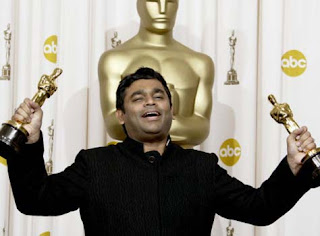 Mr. Gulzar was born on 18th August 1934 and his original name is Mr.Sampooran Singh Kalra. ‘Gulzar’ is his pen name of the popular Indian poet, lyricist and director.

Mr.Resul Pookutty -was awarded the Oscar Award for the ‘Best Sound Mixing’  for the film ‘Slumdog Millionaire’ in  the year2009 along with Mr. A.R.Rahman and Mr. Gulzar.

He, along with Richard Pryke and Ian Tapp won the Academy Award for Best Sound Mixing for the film Slumdog Millionaire.