Tuesday, 7 February 2023
You are here: Home 2013 November Will the Indian Railways Provide ‘Safe’ and ‘Hygienic’ Travel to the Passengers?
The passengers of the trains in India, in olden days used to carry their own food such as iddlies, dosas, chapatis and variety rices and hot drinks such as milk,coffee and also drinking water.

Even in those days, food items and coffee/tea had been sold in the platforms of the railway stations.

However, people had preferred to carry their own food and they considered food items and drinks available in the railway stations to be of low quality and un-hygienic.

In course of time, due to the changes in the habits and life-style of passengers and because of many constraints, carrying food items and drinks by the train passenger has reduced a lot.

In those days, the passengers used to refill their vessels and bottles with drinking waters from taps in the stations. Slowly, passengers started buying  packaged drinking water, whether “ISI” marked/branded or not, sold at stations and inside the trains.

Nowadays, the Railways Authorities are providing catering facilities in some of the trains and supply packaged drinking water manufactured by and for the Indian Railways, like “Rail Neer” -drinking water.

In some ‘Super-Fast’-trains, pantry cars are provided and some of the food items are prepared/ heated in the kitchens of the pantry cars of the trains.

However, it is the experience of the regular/frequent train passengers that the hot drinks (tea and coffee) and the food items are of low quality,  highly priced and unhygienic.

For example, the following are some of the food items catered to the passengers by the ‘IRCTC’ :

In ‘Jansatabdi Trains’ of Southern Railways, ‘pantry/kitchen’ cars are attached for providing  catering/canteen/pantry facilities to the passengers.

A passenger of Kochi had a doubt  whether the small kitchens of the pantry cars in some of  the ‘Jansatabdi Trains’ had been toilets of the train coaches.

So, a petition was filed in the Kochi Permanent Lok Adalat’ seeking clarification regarding conversion of the toilets into the panty cars/kitchens in the ‘Jansatabdi Trains’ and questioning the ‘un-hygienic’ practices of the Southern Railways in catering/canteen facilities.

Surprisingly, the Southern Railways, in its affidavit by the ‘Food Security Commissioner’ in reply to the Kochi Lok Adalat’s notice in the case of the petition filed by a passenger, has confirmed that the toilets on one side of some of the ‘Jansatabdi Train’ Coaches were converted into mini- pantry cars with water taps, water purifiers, zinc wash basins, sinks,coolers and mini fridges to prepare tea, coffee and hot water for catering to the passengers.

The Affidavit has confirmed that the changes of the toilets into mini-pantry cars would not cause inconvenience to passengers as they could use toilets on the other side of the coach and the toilets were properly cleaned and disinfected before conversion into kitchens.

(The case is still going on the Kochi Adalat and we will have to wait and see the judgement in the case.)

In houses, are toilets converted into kitchens according to ‘Vasthu’ etc?! 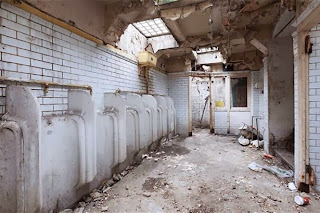 Even though the toilet so converted into kitchen is cleaned well and disinfected before such a conversion  how will the people living in such a house feel?

The Southern Railways must stop such un-hygienic practices of converting toilets into kitchens and use purified water for the catering in trains, instead of using the contaminated water from the toilets.

Already, there are rumors/news that the mineral water manufactured and sold in the trains are refilled from the water outlets in the stations for the use of cleaning the coaches.

The Southern Railways authorities should consider the fact that they are not providing any of the catering facilities, including the drinking water ‘free’ and the passengers have been paying heavily for tea, coffee and even drinking water.

While a huge amount of funds are allocated every year in the ‘Railways Budgets’ , the persons dealing with the provisions of the facilities to the passengers should not try to be smart in ‘cost cutting’ by such ‘un-hygienic’ measures.

Indian Railways should provide to the passengers not only, ‘safe’ travel, but also ‘neat’ and ‘hygienic’ travel. The  the ‘Food Security’ authorities in the Railways must ensure quality in the food items catered to the passengers.

Nice post, I bookmark your blog because I found very good information on your blog, Thanks for sharing more informatiom
http://goo.gl/tGqfRs

Now day by day indian railway is improving its facilities and it is great new for all passenger. Many many thanks for sharing such a wonder full article

Totally mind-blowing information! I’m sad that people should undergo such unhygienic conditions. That food looks horrible, and I don’t want to imagine how it tastes.